"Stapleton will demonstrate the most successful integration of urban activity with wildlife and the natural environment in Colorado... Stapleton will provide approximately 1,680 acres of open space, much of it restored native grasslands, stream corridors and animal habitat." - Stapleton Development Plan (aka The Green Book)

A key part of the development of the Central Park community, originally called "Stapleton," as envisioned by "the Green Book" was the decision to retain more than a third of the Community's total property (about 1,700 acres out of 5,100 acres) for parks, recreation, and open space.

As development continues in Central Park, trails, parks, and open space have evolved to enhance the unique nature of this urban community. Below you will find information on some of the larger parks and recreation areas within Central Park - there are hundreds of additional small "pocket parks" and courtyards within the community. 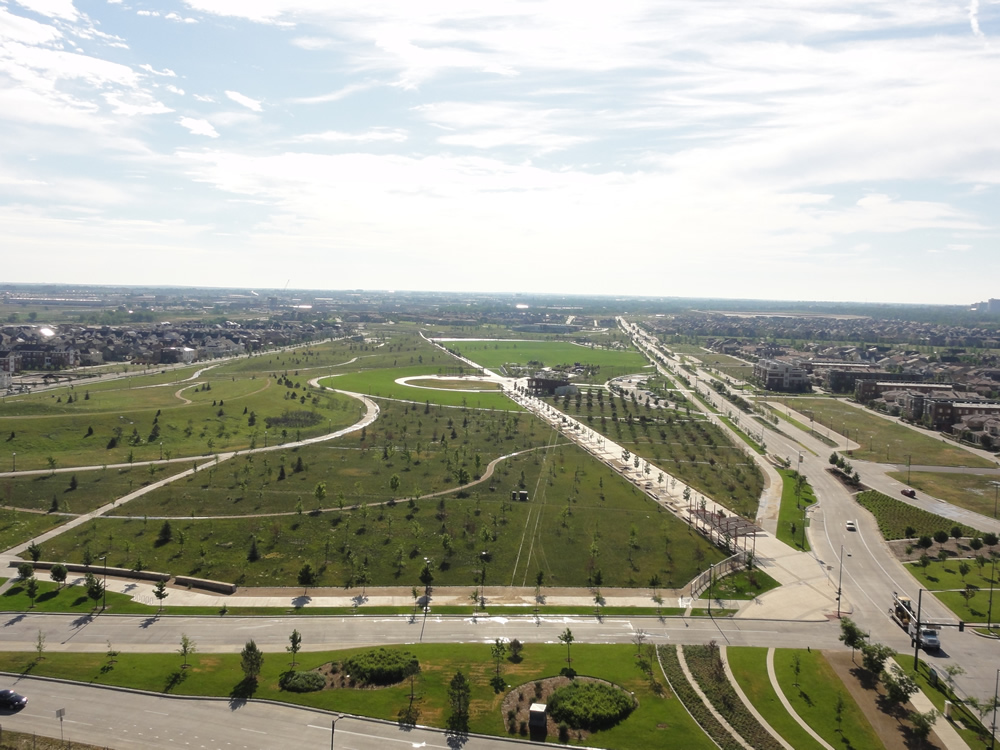 The 80-acre Central Park is one of the premier urban parks in the United States, and the third larget park in Denver. In addition to plenty of open space and athletic fields, the park features a children's play ground with climbing rocks, a purpose-built sledding hill, fountains, and a one acre lake perfect for model boat sailing.

Located in the middle of the community for which it is named, Central Park runs west to east from the former Stapleton International Airport control tower to the Central Park Recreation Center. 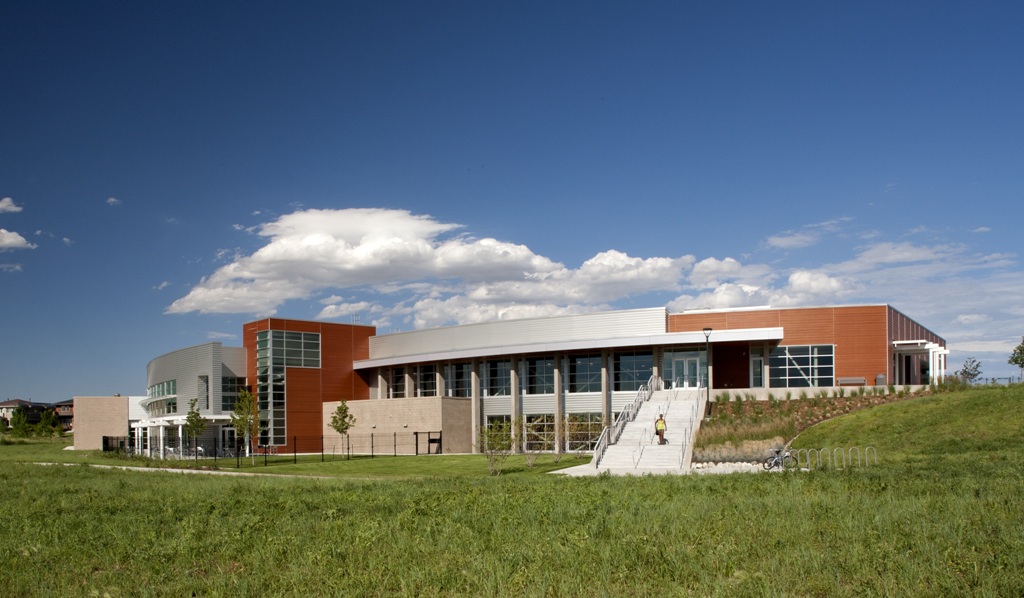 For more information about the Central Park Rec Center, download an information sheet or view current activities and programming offered through the Denver Parks and Recreation Department. 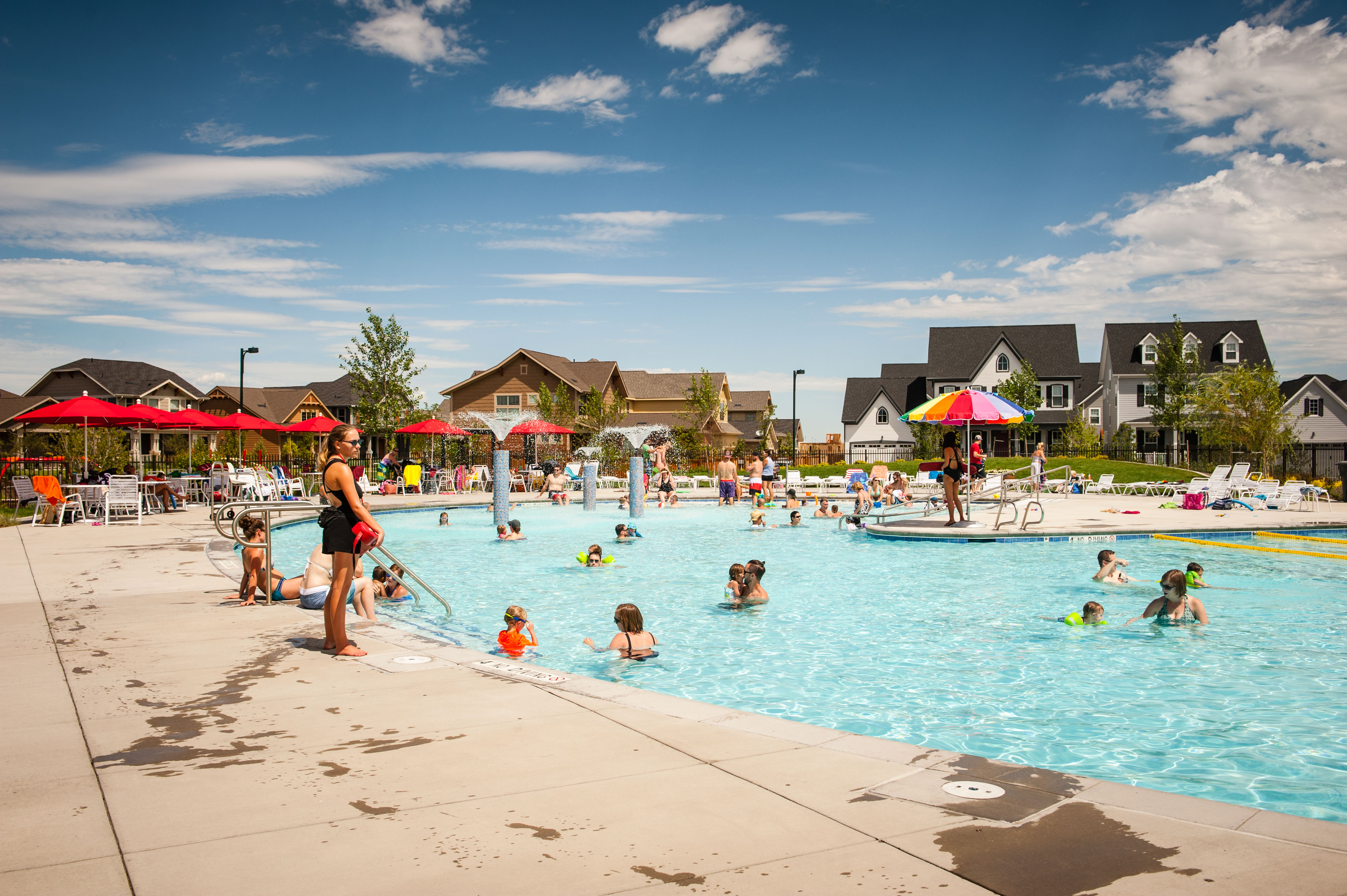 The Master Community Association operates seven public pools throughout Central Park. These pools are designated as public swimming pools for the surrounding community and neighborhoods. Each pool is open to the public and fully staffed with certified lifeguards, and all pool facilities have bathrooms, showers, and changing facilities, and are equipped with barbecues and picnic facilities.

Usually open from Memorial Day weekend through Labor Day, each pool incorporates a unique schedule and menu of programs suitable for its design. 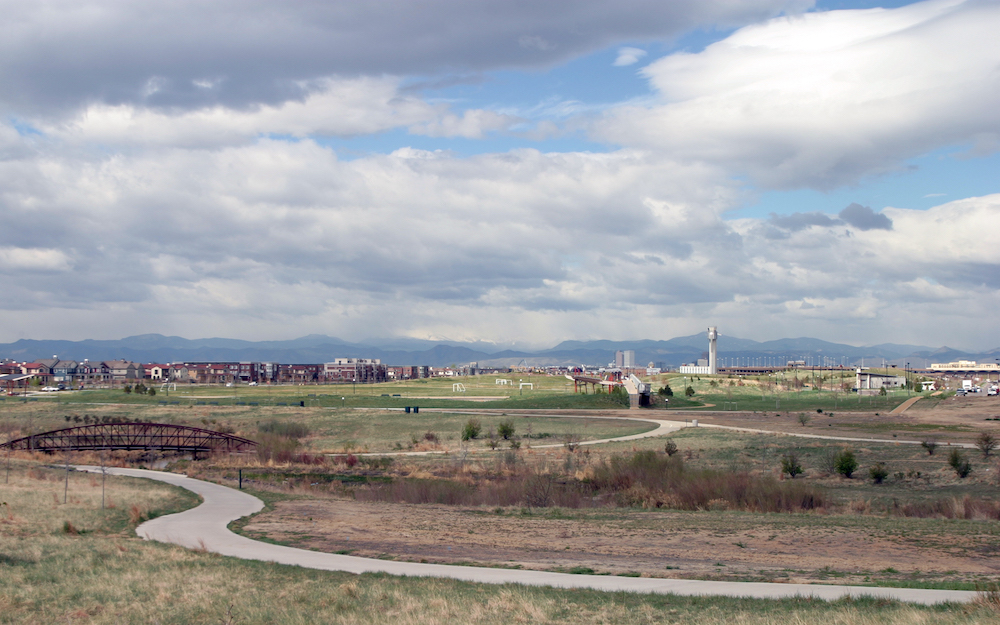 Central Park's 25+ miles of trails and paths connect the community from one end to the other (and to surrounding neighborhoods) as well as integrating with Denver's vast 850 miles of bike trails.

Hop on a trail or bike path and you're on your way to the Bluff Lake Nature Center, The Rocky Mountain Arsenal National Wildlife Refuge (watch out for bison!), and the Sand Creek Regional Greenway. With hard and soft trails through out the neighborhood, there's something for everyone on two (or four) feet or two wheels! 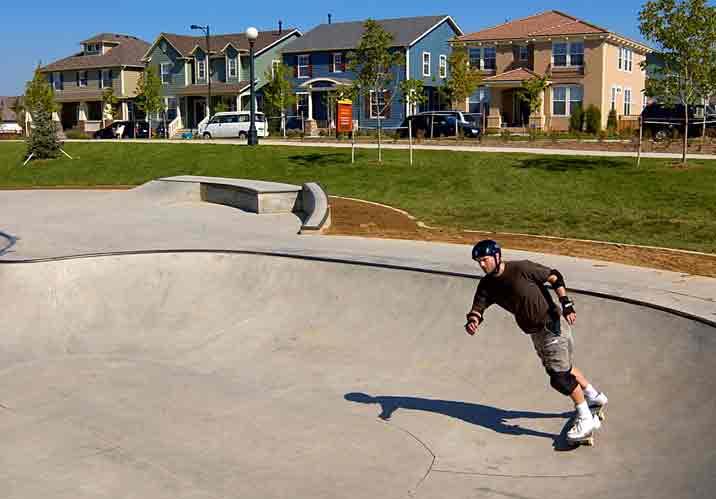 In the Central Park community you are never more than a few blocks from one of the 60+ parks, ranging from the 80acre Central Park to dozens of smaller neighborhood "pocket parks" - a gathering spot for neighborhood get togethers, kids at play, and after-work relaxing.

Featuring amenities ranging from grass fields to season-inspired playgrounds, to a skatepark, to community pizza ovens, the park system in Central Park has been designed to provide great opportunities for neighbors to build a community. Read more here about all the parks in the neighborhood.

Denver's only non-profit nature center, Bluff Lake occupies 123 acres adjacent to Sand Creek on the eastern edge of the Central Park development (just east of the aptly named "bluff lake neighborhood." It offers a variety of native habitats including a seasonal lake, wetlands, short-grass prairie, a riparian zone and wetland woodland. Tens of thousands of visitors, including over 8,000 area school children, come to Bluff Lake each year to enjoy a few moments of solace and connection to nature or to take part in one of thier many scheduled programs and events.

Learn more to plan your visit to the Bluff Lake Nature Center. 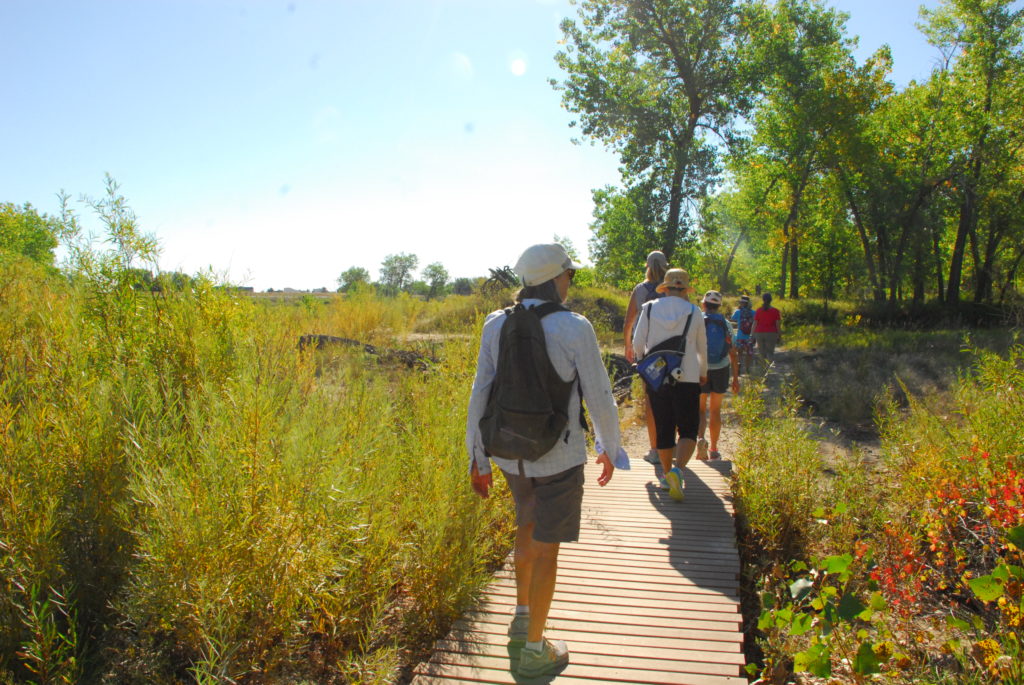 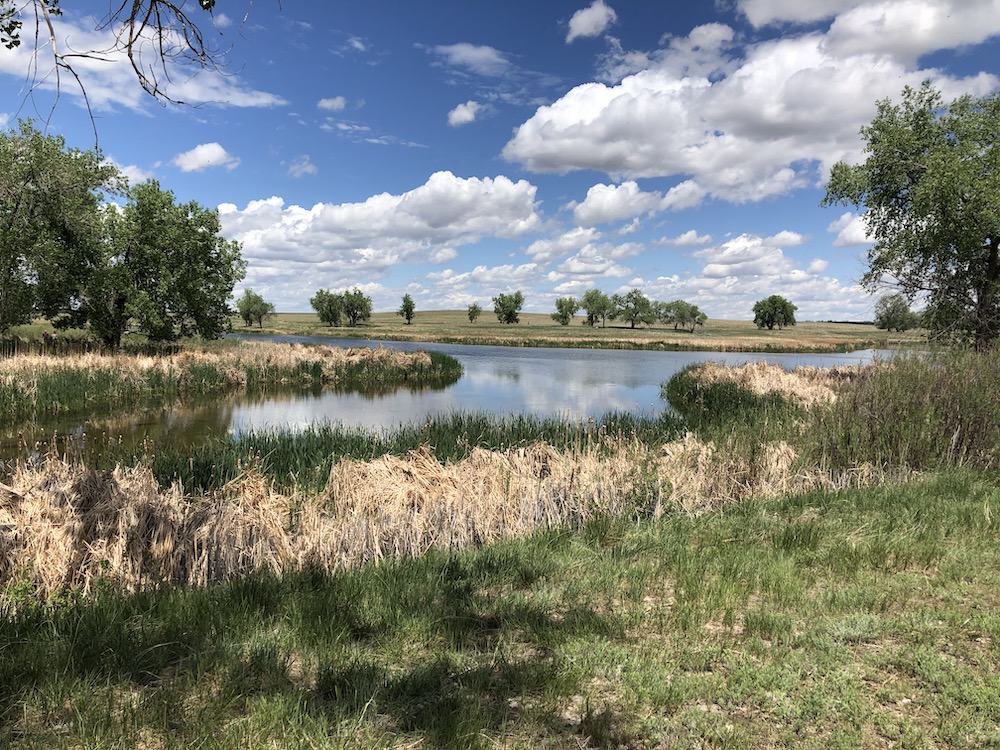 Located on the northwestern edge of the Central Park community, the Rocky Mountain Arsenal National Wildlife Refuge covers 15,000 acres of wetlands, prairie, and woodlands habitats - but it is best known for its Bison herd! The site of a World War II chemical weapons manufacturing facility, the Refuge site cleanup began in the 1990s and was completed in 2010. Local residents and visitors now visit the Refuge to hike on its 10 miles of trails or to take the 11 mile Wildlife Drive to see bison, deer, hawks, waterfowl and more.

Other Resources in Central Park

" "Diana and Michael helped us buy/build our first home and sell it 3 years later. Going in completely blind, these guys helped up see a wide array of homes within our price point and lead us to the home that we fell in love with. When it came time to sell, they knew exactly how to keep us calm with the process, but also how to get us on the ball when we needed to. Always responsive and extremely knowledgeable. Truly a great team." "

" "Diana and Michael Kearns are engaged-in-the-process, results-oriented professionals. Their knowledge of the market, purchase and sales advice, thoughtfulness and professionalism are exceptional. Simply stated, they are the best real estate agents I’ve known." "

" "We have worked with Michael and Diana for the last 10 years and I cannot speak highly enough of them. They are the best! We have bought 2 different houses in Stapleton with them and also sold a house with them. They know the area and the process inside and out." "

" "I would give my highest recommendation to Diana and Michael Kearns, they are extremely knowledgeable, professional, and responsive. We needed to sell our house somewhat quickly due to moving out of state, but wanted to try to sell at the best price possible. They were great with helping us create a strategy and were great with guiding us through with the entire process. We had to close from a thousand miles away and it went through with zero problems. They were a pleasure to work with and were great at keeping us from stressing ourselves out. Regarding Stapleton & NE Denver, I don't know of anyone who is more knowledgeable about the neighborhood and the market there. If/when we move back to Denver they will be one of our 1st calls." "

" "Just one last e-mail, to say thanks for a beautifully handled, smooth transaction. I really appreciated being able to rely throughout on your experience and expertise, your focused attention, timeliness, and professionalism, and I am convinced that it’s thanks to these qualities you brought to the table that my property sold so quickly and the close went so smoothly… Best wishes to you both for your well-deserved continued success." "

" "Diana and Michael are a great team. They would responsive and extremely helpful in the Purchase and Sale of this property. Thank you for your hard work and keeping us focused." "

" "We were very fortunate to have worked with Michael and Diana during our move to Denver. Not only did they help us find a great home, they helped us navigate the area and were available to help even after the closing. They are very knowledgeable, provide great guidance, and are extremely easy to work with. Having worked with other realtors in the past, it is clear that the Kearns Team goes above and beyond. We would highly recommend them!" "

" "Thanks for everything you did to get my home sold so quickly. I know that I wasn’t your only client, but you made me feel like I was the only one!" "

" "We have been so lucky to find you! Your 'know-how' put us in the perfect house and location! Thank you for your friendly and helpful approach. We’re so happy to call you neighbors!" "